Not much has changed since my last post, the days are still biting cold and the skies are still flint grey, and I still have a raging appetite for foods that induce cosiness, warmth and savoury satisfaction. Perhaps one of the positives of the wintery bleakness is the attraction of the kitchen and the time to teach yourself a new skill from which you can reap the most delicious and cosy of rewards. If you’ve never made your own pasta before, a cold winters day is the perfect time to start.

My recipe for Sweet Potato & Ricotta Gnocchi with Peas & Blistered Tomatoes is easy and relatively speedy to put together. Little pillows of sweet, soft pasta dough are cooked in a pan until golden and crusted on the outside and light and fluffy on the inside. Tossed with a medley of sweet green peas, sun-dried tomatoes, blistered cherry tomatoes, spinach and parmesan, and served with a crumbling of goats cheese – this recipe excites, satisfies and keeps them coming back for more. 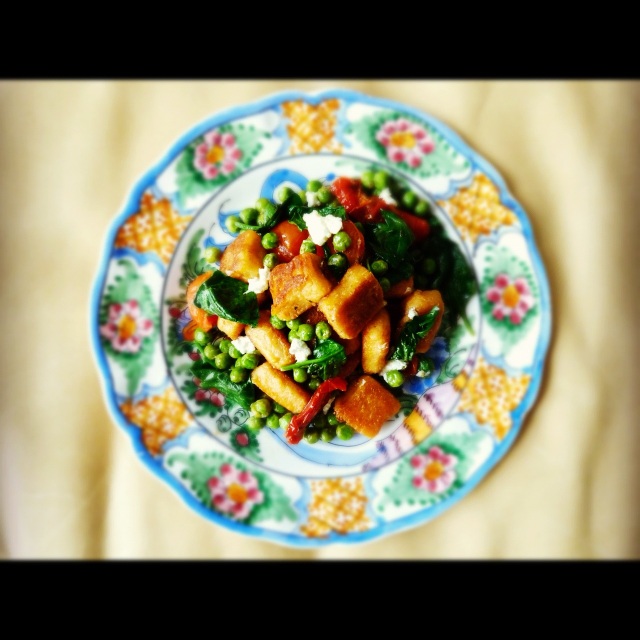 Zest and juice of half a lemon 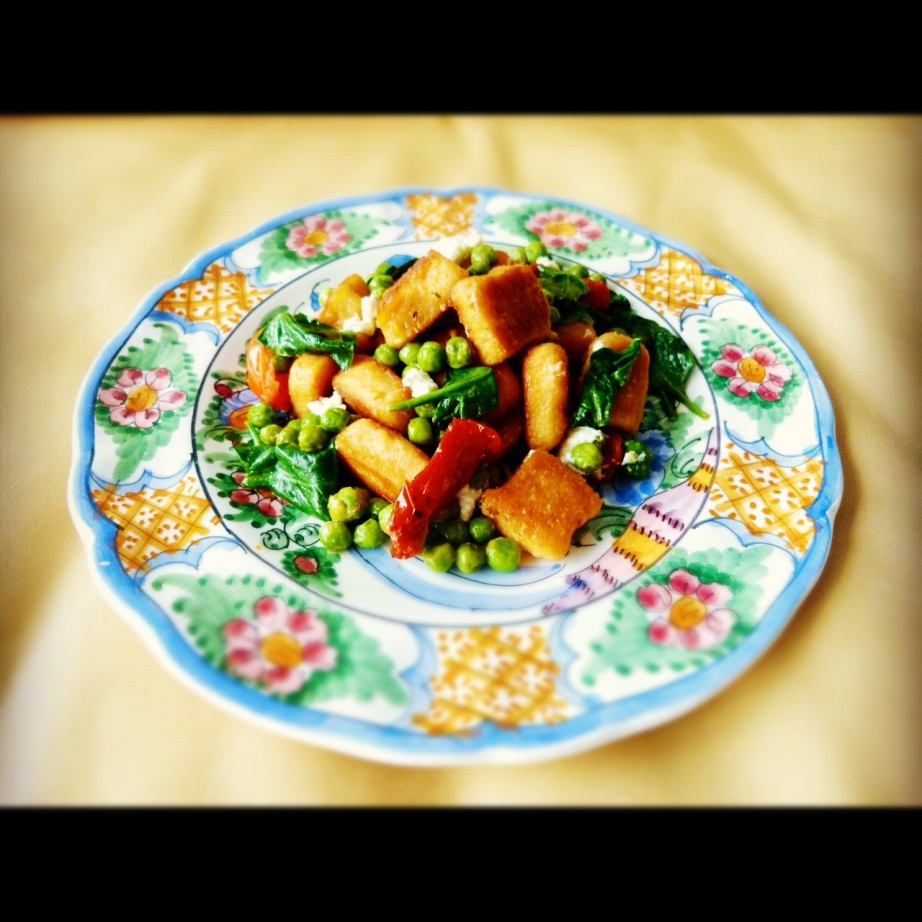 Pop the sweet potato and desiree potatoes into a large saucepan of salted water, bring to the boil and cook for about 30 minutes, or until soft – Check the potatoes at about the 20 minute mark and remove any that are cooked through. Drain.

While still warm, mash the potatoes in a large bowl with a fork along with a generous pinch of salt – be careful not to over-mash, you are simply looking for an even consistency with no noticeable lumpy bits. Let the potatoes cool a little so that the egg won’t cook when you add it into the potato mixture. When you are ready, drizzle the beaten egg into the mixture and gently fold into the potatoes. Once the egg has been incorporated, stir in the ricotta and a little extra sea salt.

Sprinkle ½ cup of the flour across the top and stir into the potatoes. Gradually add the rest of the flour, mixing well with your hands, until you have a smooth, velvet-like consistency that is still slightly sticky to touch – Don’t be worried if you end up with extra flour, sometimes it just doesn’t need it! At this point the dough should be moist and should feel nice and light.

Divide the dough into 3 pieces and roll each out on a floured surface into a long 2cm long log. Cut logs into 2cm pieces. Place gnocchi on a floured baking tray and cover with a tea towel until ready to cook.

Heat a couple of tablespoons of olive oil in a large non-stick saucepan over medium-high heat. Add the gnocchi in a single layer and toss to coat with the oil. Let them cook until they are gorgeously golden and crunch on the bottoms and then use a spatula to flip them over. Cook other sides until they are golden.

Add the cooked gnocchi to the pan with the tomatoes and peas. Add the parmesan cheese, spinach and an extra drizzle of olive oil. Toss to combine. Finally add the lemon juice and zest, salt and a crack of fresh pepper. Toss a final time and transfer to serving plates. To serve, crumble with goats cheese and a little extra parmesan if you like.

Error: Twitter did not respond. Please wait a few minutes and refresh this page.